Since the year 2003 I, Sengmali Sengvatthana, start-up a company Lao-Indochina Air Service, this involved reserve and sale airline tickets for domestic and international flights. In year 2004 the company expands its service to including import and export. Items for import and export including vehicles, parts, construction materials, food and drinks, and export agriculture products which are part of the expand services.

With the understanding of high demand in China for products such as Tapioca for about 12 million tons per year plus Laos has the land area good for growing cassava roots, has general labor, and working with Ministry Industrial and Commerce, Nayobai Bank, Lao Development Bank, and other government agencies, we can promote the plantation area to satisfy the need of such product.
Our Plantation department is involving in the training of farmers in three less develop districts such as Hom District, Sangthong District and Borlikanxay District plus other farmers from three provinces. The three provinces are: Vientiane Capital, Vientiane Province and Borlikhamxay Province. The focus of this plantation development is the technical of plantation, to increase yield, and the funding for the project.

Since 2005, for three years, in the beginning the company purchased dry cassava root for exporting purpose. There issues were: higher transportation costs – we have no access to the sea also the complexity of purchasing slicing/drying cassava from customers due to the fact of difficulty of storage. With above reasons, the company decided to build tapioca factory – tapioca is easier to take care off. And also, this will increase employment for the local people. The factory began construction in 02/07/2007 at Nashawn Village, Pakngum District, Vientiane Capital.

Most machinery is from China which was ready to produce tapioca flour on 19/06/2008. On that day, 19/06/2008, the factory officially opened and commences producing tapioca. The total registered capital of $5.5US millions. Until now we have total register capital of 100 billion kip ($12.5 million) for Lao-Indochina Group Company.

Our company used 2+3 method to promote cassava plantation as following:

Presently, the company has over 13,000 hectares signed agreements of land with farmers in three provinces. The capacity of the factory is 320 tons per day which represent about 1,000 – 1,200 tons of cassava roots. The company has high demand from China for tapioca.
Presently, the company has exceptional result, which is shown in receiving GMP and ISO 9001:2008 standard from England. The product meets and exceeding standard of our customers in and outside the country (particularly China) and number one product in China with respect to Tapioca.

The company is also involving environmental issue aspect. The company built 12 water reservoirs which are 250 meters long, 50 meters wide and eight meters deep for the waste water from the plant as part of water treatment before release back to the river. The company also signed an agreement with Bio-Gas Company from Thailand with fund from Finland, to construct Bio-Gas factory to produce bio-gas by the third quarter of 2012. 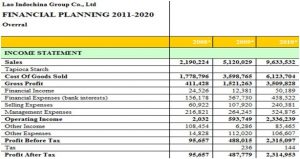 In US dollars. LIG track record on its exceptional growth and return in investment. 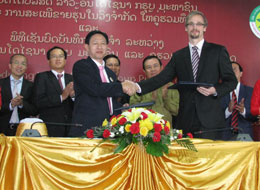